This year especially, I am aware of the differences in males and females!

I know that men and women are physiologically different, and women’s competitive times almost always fall behind those of men’s.  That should explain the 30 minute difference in Boston qualifying times, right?  Not exactly.

What I didn’t realize was that women do seem to have a softer qualifying time than men when observing elite runner performances.  According to Tim Noakes in Lore of Running, there is about an 11% gap in performance between men and women.  This can be attributed to men having greater muscle mass, increased VO2, and higher levels of testosterone, amongst other things.  In using 11% as the difference between men’s and women’s performances, this would mean that women would need to run at about 3:20 to be an equivalent. 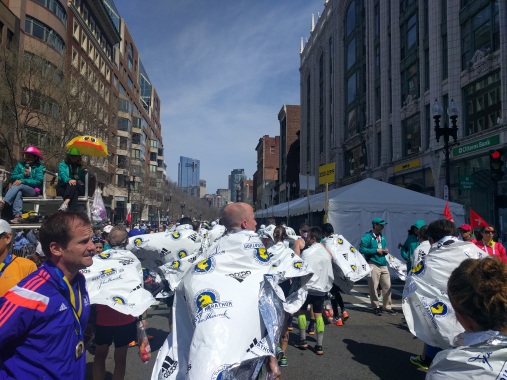 We all look like superheroes, regardless of finishing times

The disparity of this qualification standard has not been lost on many Boston Marathon runners and commentators.  Compilations of former marathon times comparing the average finish times of men and women are documented in many articles and blogs trying to determine if the current standards are equivalent between men and women.  There is something called the Age Grade Calculator, which is the ratio of the approximate world-record time for a given age and gender divided by the actual time raced.  Using this form of calculation, the Boston Marathon standards would come up short, or long rather, for the women’s standard qualifying time.  This calculator also favors younger women age groups as opposed to older women age groups.

As Amby Burfoot notes in a Runner’s World rebuttal, however, this calculation is a world record comparison tool, which does not scale proportionally with the rest of the population of runners. Burfoot cites data from Ken Young, at the Association of Road Race Statisticians (ARRS), who notes that the men’s and women’s world record times are just 9.5 percent apart, while moving down the scale from the 100 percentile to the 99.8 percentile, there is a 21.4% difference in finishing times.  Chris Schwirian, a Biological Sciences lecturer at Ohio University, also corroborates that the average gender gap is closer to 20-22 percent for half marathon, marathon, and ultramarathon.

The unicorn is a perfect symbol for the Boston Marathon

So that is the kicker.  In order to reconcile the Boston qualifying times between men and women, one must concede to normal, average performance range comparisons.  And the Boston Athletic Association has elected to go this route in order to get a representative sample across age and gender based on the total population of people who complete marathons, not according to elite athletic performance.  As I said in my last blog on Boston qualifying times, my 2016 BQ was only a 3:29, so I benefit from using a calculator that takes the normal population data set into account.  I’m thankful for the way that the BAA has chosen to do the math because it provided me with one of the best running experiences of my life!

What do you think?  Are the qualifying times too lax for women?  Or is it appropriate to select a scale that will permit an approximate number of both men and women into the race?

2 thoughts on “Are Boston qualifying times too easy for women?”